The origin of bees

Bees appeared on Earth approximately 80 million years ago and they evolved from wasp-like insects (Michener, 1974). In their present form has been since 30 million years ago. There are more than 20,000 species of bees and 700 races in the entire world today - amongst them the common bee Apis Mellifera L.

It is believed that the spread of Apis Mellifera began in the area of the Indian peninsula and Southeast Asia. The minimum size of a bee is 2 millimetres long and the maximum size is 39 millimetres (Rindener, 1986).

The house of the colony


The bee is a social insect and it lives in populous, well organized colonies – the apiaries. Each apiary has thousands of bees, - 50,000 or more at the beginning of summer – which are separated in three classes; the worker bees, who make up the most of the population, the drones and the queen bee.

The apiary is built in nests that protect it from wind and rain. A nest is a hollow space with a small opening – such as a tree hollow, a cavity of a rock or of a building – in which bees build honeycombs. In 1851, the American apiarist Langstronth constructed the first beehive, a complex tool which allows the apiarist to intervene in an apiary’s life, to assist its development with various apiarian operations and to collect more honey. Bees spend most of their lives performing activities inside their nests and only a small portion of their activities take place outside in the environment, where we take notice of them.

The members of the colony 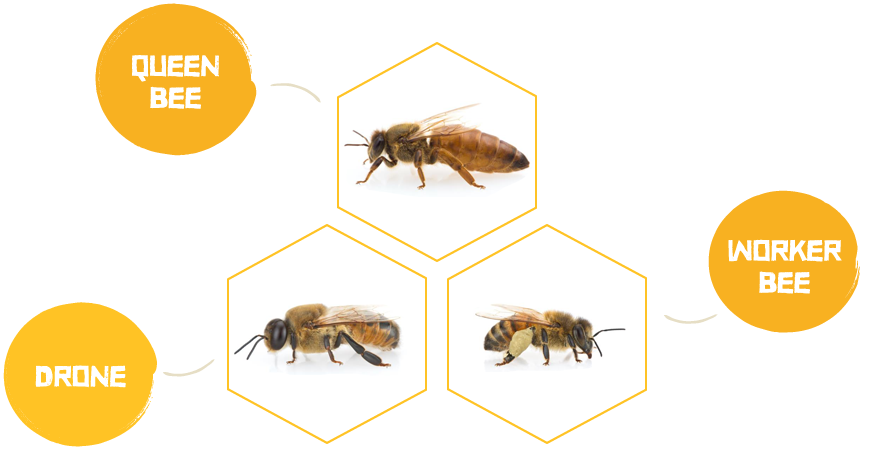 She is the smallest individual, in size, of the apiary. She has a short abdomen, long wings, long proboscis and a sting. She has organs in order to collect and carry water, nectar and pollen and glands which, among others, produce royal jelly and beeswax. The worker is an incomplete female and has an atrophic reproductive system. In seasons of intense activity (spring, summer) she lives no more than 45 days, while in wintertime she lives up to 6 months. Basically, her chief mission is being occupied with all the work of the apiary, hence her name.

He is the male individual of the apiary. He has short proboscis, big eyes, broad abdomen and thorax. In contrast to the worker bee, he doesn’t have a sting, or organs to collect food and to produce beeswax. His reproductive system is matured 12 days after his birth and he produces up to 10,000,000 spermatozoa. His main mission is to fertilize the queen bee. Therefore, when nectar becomes scarce the worker bees drag the drones out of the apiary and they let them starve to death. He has a maximum lifespan of 2 months.

She is the largest individual of the apiary. The brighter colourings and the longer abdomen make her look like a wasp and they make her easily distinguishable from the small worker bees and the stout drones. She has no organs for collecting pollen or wax glands like the worker bee. She uses her sting to kill her sister queens and almost never to sting humans.

The queen bee lives 3-5 years and she never leaves the beehive. She only flies outside twice in her life; first to reproduce and then to swarm. If she finds herself outside the beehive for a different reason, she cannot return to it. Each apiary only has one queen bee, who is the single perfect female individual and also the mother of the whole population. She doesn’t collect food or deal with other tasks. Her main mission is to lay eggs and manage the apiary.

Read Next: Learn about Reproduction of Honey Bees